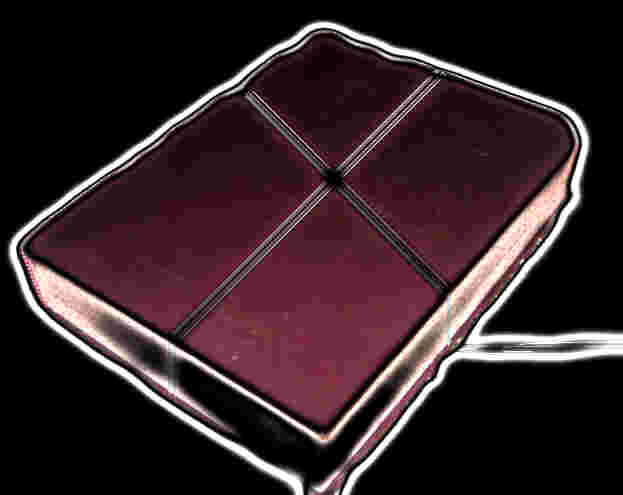 Chapter 2: It's Tough To Be A Dumb Bunny!

Rabbits just haven't figured out what to do with lots of problems! And poor Fluffy tossed and turned all night just trying to perfect the use of that spell in his dreams. Sometimes it would work, in his dreams. Then the book would open up so very nicely, that he felt proud! Sometimes, though, the Magick book turned black and opened with an evil laugh and turned loose monsters like dogs and wolves in his dreams.

Mam woke him early, and sweetly. She was so wonderful! Mam almost always kept her promises. But the most special times were when she held him, rubbed noses, and explained with sadness why she couldn't keep a certain promise. He could see how badly she felt. It made him feel special, somehow. Usually, he understood too. Sometimes he didn't.

When Fluffy woke up, he heard himself repeating the spell out loud! His eyes glowed; he twitched his little pink nose in pleasure and got up.

Mam had a carrot all ready for him! "Eat hunny bunny, then practice your magic!"
"Ok, Mam. You're the greatest!! Thanks for waking me early!" Fluffy gazed with love at his Mam.

After he finished the carrot, and still repeating the now well memorized spell, Fluffy became determined. His ears were straight up, his eyes clear, his teeth set with... um, well, determination! He twitched his nose magic and the book arrived. He tried it several times. Do you want to see what happened? Shhh, it's a secret, so click on the "100% Secret".

Now, as dawn approached, Fluffy found himself getting scared again. It was almost class time. Wizard Stumper was a tough teacher. He only seemed to give each rabbit one chance. Fluffy wondered "Why?"

Mam and the other mother rabbits were mostly gentle and explained a lot, if fluff were to muff or fluff something! But not Wizard Stumper, he had sent a poor rabbit away just for asking a question! Fluffy knew he had to be right every time after that in his class. It scared him. Fluffy knew he made mistakes! Rabbits are a lot like people, they can get really mixed up. Fluffy even knew one rabbit friend who just could not decide what to do. It was so sad. Roadyk stayed in the middle of the road that day and was run down. It all happened because he would not decide which way to run! His family and friends were so very sad. So Fluffy knew he had to make good, clear decisions. Sometimes in life you only get one chance.

It was a beautiful, sunny, spring day. The temperature was comfortable. There were lots of pretty pink cottontail clouds in the early morning sky. Then there were a few streaming mare's heads clouds that looked just like horses...and one very dark, scary looking, dog cloud, chasing them all.

The rabbits gathered in the forest glen right at daybreak. There were a lot of scared faces in the 21 rabbits that were still in the class, at this still scary break of day.

It was with a sudden poof and a soft pop that Wizard Stumper suddenly appeared from the dog cloud! "Ooooo" and "eeek" the rabbits squeaked together as they moved closer to one another. Fluffy shivered as he huddled with the class. He knew he had to get it right this time!!!

Several rabbits nodded, three brave hares said "yessir" and four sad bunnies hung their heads. Fluffy choked up and said nothing, just shivering. Stumper immediately pointed to the four who had hung their heads, each in turn. They all turned white as a snow bunny! The first one, a cottontail, started to make excuses... He disappeared after halfway through the first excuse!

The second, Thumpy, a big bouncy bunny, looked up in panic, twitched his nose helplessly, bringing the book... It did open, but it was like watching some one carefully fill a basket one blueberry at a time! He fainted. The third, a tiny little Himalayan stuttered and disappeared when the book didn't even come! The fourth bunny, a beautiful Angora gulped and shook as she called the book. It came. And it opened. She squealed with delight! Then she giggled, turned red with embarrassment and hid behind some other rabbits.

As each one bravely or desperately tried, Wizard Stumper calmly poofed each one who failed, away. Now the class was down to nineteen. Each rabbit had to prove he or she could open the book. By the time Stumper came to Fluffy, dead last, there were ONLY 14 student apprentices left in the glen. Shaking and almost in a panic, Fluffy went from total fear to that firm, determined "do or die" look again. He was suddenly so calm, he could not believe it! He called the book. It came, as he recited the spell under his breath, and... It popped open!

"Excellent" said Stumper with satisfaction to the whole class. His eyes sparkled too. The students fell completely silent, still uneasy. They were afraid of what came next! Here are the first words Stumper had spoken since he started pointing to students to have them prove they could open the book, at dawn. "I am proud of each and every one of you!" The scared bunny group picked up all their ears off the floor as if they were one rabbit. Their eyes began to shine!

"You have proved you are magic bunnies. You are all promoted to Apprentice 2, Congratulations!" Then the other foot flopped. "Now we can get serious about magic," stated Stumper, with a scowl. "The fakers and wannabes are all gone. After you learn the next three spells by tomorrow at Dawn, he went on, "You may be ready for your first adventure..." Several bunnies fainted.

"Any questions?" Stumper looked forbiddingly to each of the students. "I thought not!" He said with satisfaction. "See you all tomorrow." Stumper disappeared!

The bunnies all began to chatter with each other. Lots of "what" "how" and "oh nos" filled the ear and the air! The energy and excitement of their promotion, each bunny left as they had the previous day. Each was scared, unsure and afraid to fail. The ears all drooped low. Some rabbits left in pairs or singly. Now do you remember how hard it was to learn ONE spell? These poor bunnies had ONE day to learn THREE spells. How can they do that? Do you have any ideas at all? Write them down or tell someone and see if you have solved the problem. Tune into the next page to find the answer. No cheating now!!!